Positioned in the northwestern area of Orange County, California and across the border of Los Angeles County sits the beautiful city of La Habra.   La Habra’s neighboring cities are La Habra Heights, Brea, Fullerton and Buena Park.  La Habra is centrally located with Los Angeles being 30 miles away and Anaheim is only a mere 8 miles away.

La Habra’s name was originally Rancho La Habra. The name referred to the “pass through the hills”, the natural pass to the north between the Chino Hills and Puente Hills into the San Gabriel Valley first discovered by Spanish explorers in 1767.

During the 1920’s Rudolph Hass planted the Hass Avocado Mother Tree in La Habra Heights which is just north of La Habra.  During this time La Habra earned the distinction as being the largest avocado center in Southern California.  The Hass avocado has become one of the most popular cultivars worldwide.  La Habra’s city tree is the avocado.

Among the cities earliest settlers were the grandparents of former president Richard Milhous Nixon, the Milhous family.

The city of La Habra’s motto is “La Habra-A Caring Community”. They show this through many of the cities points of interest.

La Habra’s world famous annual Corn Festival also shows their caring community motto, hosted by the La Habra Lions Club.  The corn festival attracts thousands of visitors from all over Orange County.  This event is held on the first weekend of August at El Centro-Lions Park. This fun and free event features live music, food, games and rides. The festival started as a home town dance and cookout years ago and is one of the most popular and looked forward to attractions during the summer.

La Habra’s Children Museum is a great hands-on facility.  Some of which is inside a 1923 Union Pacific Train depot.  In1977 when the museum first opened it was the first of its kind west of the Mississippi River.  The museum has over 90,000+ visitors a year. Devoted to young children this facility is truly a unique educational facility.

La Bonita Sports Complex is a multi-million dollar facility and is one of the city’s crowning jewels.  The sports complex has a skate park, multi-use rink and court, four lighted softball fields, playground and a concession/restroom building.

Along with all the great things to do in La Habra they also have terrific restaurants like El Cholo’s Restaurant which was established in the 30’s with it Sonora style Mexican Cuisine you can have a delicious meal while looking at your favorite celebrity’s autographed pictures; from Nolan Ryan to George W. Bush who have all eaten there as well.   Another great five star restaurant in La Habra is the Cat in the Custard Cup. 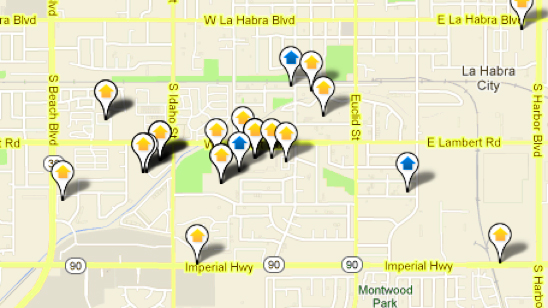 Welcome home! A beautiful home awaits you! Upon entering the home you'll be welcomed by spacious rooms and a neutral color scheme which makes decorating a breeze! The fam...

Gorgeous 4 bedroom 4 bath home, plus office, in the coveted area of Tapestry, La Habra. This gated community has all the amenities of new home construction. Wonderful Nor...

Originally built as an SFR, building is now used as office.

This is your lucky day!!! This beautiful Ranch Style Home in the highly desirable area of La Habra has been remodeled about 10 years ago with some great style. Don't pa...

Great opportunity! This Amazing condo has all the amenities you ever wanted! For a great price! Remodeled contemporary granite kitchen, open floor plan concept, newer dis...

This lovely 4 bedroom, 2.5 bath home in the Sunny Hills Village Community offers the space and convenience you're looking for! Single-family home with attached garage and...

Welcome home to this newly remodeled One bedroom One bath Home in the the Quiet Community of Woodridge. This Single story end unit has only 1 adjoining wall making it fe...

Great location building is located in the heart of La Habra near the City Hall and has great Potential. Building is great for a Tax, Insurance,Salon, and more types of bu...

Great location on a cul-de-sac in a wonderful La Habra neighborhood close to Westridge Golf Course. Great floor plan with not only a family room and living room but also ...

Must see great investment property! This is a property for 2 families to live on the same lot or an investor looking for potential cash flow. The front unit features 2 be...

Commercial /office free standing property in La Habra for OWNER-USER or INVESTMENT is for sale!!! Located on the North east corner of Beach Blvd and San Jose Ave, Close ...

Based on information from California Regional Multiple Listing Service, Inc. as of . This information is for your personal, non-commercial use and may not be used for any purpose other than to identify prospective properties you may be interested in purchasing. Display of MLS data is usually deemed reliable but is NOT guaranteed accurate by the MLS. Buyers are responsible for verifying the accuracy of all information and should investigate the data themselves or retain appropriate professionals. Information from sources other than the Listing Agent may have been included in the MLS data. Unless otherwise specified in writing, Broker/Agent has not and will not verify any information obtained from other sources. The Broker/Agent providing the information contained herein may or may not have been the Listing and/or Selling Agent.